There were no roads west of Buffalo, and few boats upon Lake Erie when those first settlements began to be formed in the region of the Western Reserve, also known as the Connecticut Reservation. Immigrants had to work their way through forests and over the rivers and marshes of the intervening wilderness as best they could.

The Rev. William Wick was one of the first two ministers to settle in the territory of the Western Reserve, the other being a Congregational pastor by the name of Joseph Badger. Wick, a Presbyterian, belonged to the Synod of Pittsburgh. In thosse early days, the Christians of the Reserve were too glad to meet any with whom they could hold Christian fellowship, than to ask after each other’s ecclesiastical connections and sentiments. And the minister who, coming amongst them, preached Christ and Him crucified, did not need to preach denominationalism, in order to secure their attention and affection.

In the absence of churches they gathered together in cabins, shop, or school-house, to mingle their worship and study the Word of God. And when a missionary visited a settlement, all rallied around him to hear the Word of Life.

In those early years, so heartily did Presbyterians and Congregationalists unite in their new missionary enterprises, that a difference was hardly recognized amongst them.

The first minister who came to the Western Reserve and the first to be installed as a pastor in this field, was the Rev. William Wick. Mr. Wick was born at Southhampton, Long Island, on June 29, 1768. The son of Lemual and Deborah (Luptein) WIck, he was a lineal descendant of the Pilgrim fathers. He was brought up in New York City, and subsequently removed, with his father’s family, to Washington county, Pennsylvania, later receiving his collegiate education at Jefferson College, Canonsburg, PA. On April 21, 1791, he was united in marriage to Miss Elizabeth McFarland, youngest daughter of Colonel Daniel McFarland, an officer of the Continental army during the Revolutionary war. Her mother’s maiden name was Sarah Barber. Her father emigrated to Washington county at the close of the war, and settled on a large tract of land on what was called Lower Ten-Mile creek.

In those days there was a great call for ministers, and Dr. McMillan sought out, among others, Mr. Wick, who, through the Doctor’s influence, finally left his farm, and began a course at the Cannonsburg Academy, as Dr. McMillan’s humble log cabin school was called. Wick was counted among the first class in theology taught by McMillan, and he completed his studies in 1797. Mr. Wick was licensed to preach on the 28th of August, 1799, and preached his first sermon at Youngstown, Ohio, the field of his future ministerial labors, on the first of September following his licensure.

Having accepted calls from Neshannock and Hopewell congregations, in Mercer county, Pa., he was ordained by the Presbytery and installed as pastor of these congregations on September 3, 1800. During 1801 he was released from the charge of Neshannock and installed for one-half his time as pastor of the congregation at Youngstown, Ohio. His labors were principally confined to Youngstown and Hopewell, though he occasionally worked in the missionary field. He was the first permanent minister in the Western Reserve of Ohio.

Rev. Wick was connected with the Hartford Presbytery and the Synod of Pittsburgh, these being the nearest courts with which he could connect. His initial aid probably came from the Presbytery, though afterwards he received an appointment from the Congregationalist Connecticut Missionary Society. The first mention of this support is dated April 27, 1807, in a letter from the Rev. Calvin Chapin, who had visited the Reserve. One result of his visit was the proposal that if the Hartford Presbytery would furnish ministers for the Reserve, the Connecticut Society would support them.

So long as orthodoxy prevailed, the spirit of love to Christ also rose above local and sectarian prejudice, drawing together all who were interested in seeing Christ’s kingdom advance in the new territory. The Connecticut brethren did not stop to think and inquire whether the “milk from their Congregational cows, might now be churned into Presbyterian butter” by the Synod of Pittsburgh!

Mr. Wick labored for some time as a missionary under the patronage of the Connecticut Society. His last commission, dated Hartford, Jan. 17, 1815, was as follows:

“Rev. Sir—You are hereby appointed Missionary by the Trustees of the Missionary Society of Connecticut, for the term of one year, unless sooner recalled by the Board; to labor for such a part of the time as you can be spared from your stated charge, in New Connecticut and such other parts of Ohio, as you shall think it expedient to visit.
In the name of the Trustees.
ABEL FLINT, Secretary.”

The above commission, though not “recalled by the Board,” was soon recalled by a higher authority. Rev. Wick preached his last sermon on the 13th of February following. He was now in extremely feeble health. At Hopewell the congregation was invited to his home, and addressed by him, after he became too feeble to go out. His death occurred on the 29th of March, 1815, at the age of 48 years.

At his own request he was buried at Youngtown, Ohio. It is recorded on his tombstone that during his ministry he preached one thousand five hundred and twenty-two sermons, and married fifty-six couples. He was the father of eight sons and three daughters, most of them now deceased. It is noted that his oldest son, William Watson Wick j[1786-1868], served in Congress as a U.S. Representative from Indiana.

In person, Rev. Wick was tall and thin in flesh. His disposition was calm, mild and amiable, sometimes sorrowful, but never angry. In his theology, he was what was then called a “General Atonement” man; though not so much a stickler for doctrines, as for consistent practice and devoted earnest piety.

His beloved wife, Mrs. Elizabeth (McFarland) Wick, lived “till about 1835. She was a woman of strong faith, clear views, deeply pious, had mor ethan ordinary perseverance, and died as the Christian dies.”

As Rev. Wick labored part of the time in Pennsylvania, and had from the first a stated charge, he acted perhaps a less prominent part in forming the churches on the Reserve, than some others; but he left his mark, and such a one as a good man would wish to leave. It is noteworthy that this first minister settled upon the Reserve, was settled for life. Many an early settler remembered and spoke with affection of the ministerial labors of good “Willie Wick.”

Words to Live By:
Each of us, every man and woman, has a place in the kingdom of God. Some may be first to put their hand to a work; others may follow to carry on. No one is indispensable, yet each one of God’s dear children is loved and watched over by the Lord of all creation. (Matt. 6:25-34). It remains to each of us to labor to the glory of our one Lord and to the advancement of our one faith. Do the work that God has set before you, and exhort one another to live lives that honor the Lord who has called us by His grace and mercy. 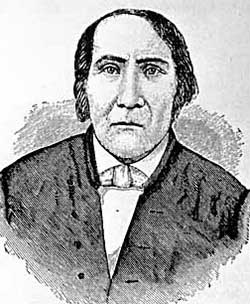