We continue today with our Election Day Sermon Series, authored by the Rev. David W. Hall, pastor of the Midway Presbyterian Church, Powder Springs, Georgia. The relevance of this series should be obvious in this election year, and Dr. Hall knows his subject well, having studied these election day sermons and even published a volume of them in 1985. I should note that not every sermon reviewed by Dr. Hall will have been by a Presbyterian, while at the same time his review will most certainly be from the perspective of a convinced, orthodox Presbyterian. We are grateful to Dr. Hall for his willingness to prepare these reviews, and consider this an excellent opportunity for our readers to think through questions of what the Scriptures teach regarding the relation of Church and State, as well as how Christians should view matters of secular governance.

Today, Dr. Hall looks at a sermon by the Rev. Jonathan Mayhew [1720-1766], who served as pastor of the Old West Church in Boston, Massachusetts. It was the Rev. Mayhew who coined the phrase “No taxation without representation.”

Colonial thinkers Samuel Adams and Rev. Jonathan Mayhew argued against the innate goodness of man with implicit reference to King George III: “Ambition and lust for power,” they claimed, “are predominant passions in the breasts of most men. . . . power is of a grasping, encroaching nature . . . [it] aims at extending itself and operating according to mere will, whenever it meets with no balance, check, constraint, or opposition of any kind.”[1] That conclusion seemed more and more obvious to many American colonists.

Notwithstanding, that had not always been the case. Previously in 1521, William Tyndale had written characteristically: “[G]overnment per se is divinely ordained by God in the Scriptures; bad rulers were sent by God to chastise the nation for their sins; rebellion causes more harm to innocents than to the guilty.” William Tyndale also exhibited the received Christian consensus: “God hath made the king in every realm judge over all, and over him there is no judge. He that judgeth the king judgeth God, and he that layeth hand on the king layeth hand on God…. If the subjects sin, they must be brought to the king’s judgement. If the king sins, he must be reserved unto the judgement, wrath and vengeance of God.” By 1750, however, that view was roundly challenged.

On January 30, 1750, Jonathan Mayhew (1720-1766), a Unitarian-leaning minister of Boston’s West Church, preached a sermon entitled “Unlimited Submission and Non-Resistance to the Higher Powers.” This sermon by a 29-year old pastor set out to interpret Romans 13 correctly, while reflecting on the anniversary of a king’s death (then nostalgically memorialize by some) a century earlier. Although Mayhew was a minister who paddled against the Calvinistic currents of his day, his views still resonated with Geneva’s distinct political tones. This influential sermon has been called the morning gun of the Revolution[2] and could have been preached by a French Huguenot resister.[3] Mayhew, a graduate of Harvard (1744) was considered by many to be the leading preacher in his day. Mayhew claimed that, “It is the duty of Christian magistrates to inform themselves what it is which their religion teaches concerning the na­ture and design of their office. And it is equally the duty of all Christian people to inform themselves what it is which their religion teaches concerning that subjection which they owe to the higher powers.”

Since magistracy was an ordinance of God, Mayhew warned believers to avoid embracing anarchy. Disobedience to those rulers who properly exercised authority remained a heinous political sin. But after noting cases in which resistance against tyrants was justified, Mayhew stated this principle: “there does not seem to be any necessity of suppos­ing, that an absolute, unlimited obedience, whether active or passive, is here enjoined, merely for this reason—that the precept is delivered in absolute terms, without any excep­tion or limitation expressly mentioned.”

His distinction between active and passive obedience was almost identical to the earlier though of Beza and others associated with the Swiss Reformation. Like Calvin before him, Mayhew argued that obedience to any authority, whether family, church, or civil, was conditioned on that authority’s ruling according to God’s standards. The duty of universal obedience and non‑resistance to the higher powers “cannot be argued from the absolute, unlimited ex­pressions which the apostle here uses, so neither can it be argued from the scope and drift of his reasoning, considered with relation to the persons he was here opposing.” While a limited duty could be inferred from scriptural teaching, “the duty of unlimited obedience, whether active or passive, can be argued neither from the manner of ex­pression here used, nor from the general scope and design of the passage.”

The duty of submission was not “to all who bear the title of rulers in common, but only to those who actually perform the duty of rulers by exercising a reasonable and just authority for the good of human society.” Once rulers begin to act contrary to their mandates and rule in their own interests—when they rob and ruin the public, instead of being guardians of its peace and welfare,” Mayhew preached (virtually as Augustine taught earlier), “they immediately cease to be the ordinance and ministers of God, and no more deserve glorious character than common pirates and highway men.” Those who “use all their power to hurt and injure the public” were “not God’s ministers, but Satan’s . . . such as do not take care of and attend upon the public interest, but their own, to the ruin of the public.” As such, they did not deserve honor or submission, nor the more practical obligation of tribute or taxes.

If the condition of authority was the good of the people, and the ruler or his designated officials did not fulfill that condition, removal was justified. Like the sixteenth-century Vindiciae Contra Tyrannos, Mayhew’s argument legitimated resistance, at least to the king’s officers, as follows:

If any other powers oppress the people, it is generally allowed that the people may get redress by resistance, if other methods prove ineffectual. And if any officers in a kingly government go beyond the limits of that power which they have derived from the crown (the supposed original source of all power and authority in the state), and attempt illegally to take away the properties and lives of their fellow‑subjects, they may be forcibly resisted, at least till application can be made to the crown.

The king, as Samuel Rutherford, George Buchanan, and many others had argued earlier, did not have unlimited power. He could not take the lives or properties of subjects lawfully. Mayhew drew on the primary instance of open resistance within the British tradition, the overthrow of British King Charles I by Calvinists and Puritans a century earlier. Providing a catalogue of reasons for forfeiture similar to the grounds of the Declaration of Independence, Mayhew argued that citizens had been warranted in overthrowing Charles’ tyranny because he levied unjust taxes, cast courageous men in prison, and betrayed his pledged support of the Protestant faith. Mayhew recast Charles I as Nero when Charles “abetted the horrid massacre in Ireland, in which two hundred thousand Protestants were butchered by the Roman Catholics”—all the while taxing the citizens to pay for such murderous acts of government. 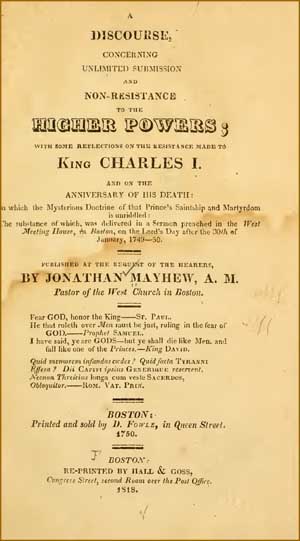 The first resistance to that tyranny originated with the king’s own lower magistrates. Mayhew emphasized that this resistance was “Not by a private junta, not by a small seditious party, not by a few desperadoes, who to mend their fortunes would embroil the state; but by the Lords and Commons of England.” These mid-level governors remained faithful to their covenant even if it drew the King’s ire. Resistance was first to arise from “the whole representative body,” not from citizens acting on their own initiative.

For Mayhew, the anniversary would “prove a standing memento that Britons will not be slaves, and a warning to all corrupt counsellors and ministers not to go too far in advising arbitrary, despotic measures.” In conclusion, he urged: “Let us all learn to be free and to be loyal; let us not profess ourselves vassals to the lawless pleasure of any man on earth; but let us remember, at the same time, government is sacred, and not to be trifled with.” [4]

The loud crack of this fired homiletical shot still echoes through various hills, calling citizens to respect government when it governs properly. However, submission is limited to the government remaining on its chartered rails. An online version of this message is posted at: http://digitalcommons.unl.edu/cgi/viewcontent.cgi?article=1044&context=etas. An abridged form (of the 18,000 word original is available at: http://teachingamericanhistory.org/library/document/discourse-concerning-unlimited-submission-and-non-resistance-to-the-higher-powers/

[3] Bailyn notes that for his “full rationale for resistance,” Mayhew drew not so much on Locke “whose ideas would scarcely have supported what he was saying, but [on] a sermon of Benjamin Hoadly, from whom he borrowed” ideas and phrases. See Bernard Bailyn, ed., Pamphlets of the American Revolution, vol. 1 (Cambridge, MA: Harvard University Press, 1965), 36.

[4] In another election day sermon in 1754, Mayhew stated that all means proper were to be used by the government to “Christianize” native American Indians and to guarantee that they not become converts to the “wicked religion” of “Romish missionaries.” See A. W. Plumstead, ed., The Wall and the Garden: Selected Massachusetts Election Sermons, 1670-1775 (Minneapolis: University of Minnesota Press, 1968), 307. Accordingly, he believed the state had a duty to “bring them if possible to embrace the Protestant faith.” Idem. On two other occasions in that same sermon before the Massachusetts House of Representatives, he indicated that governors should support the Protestant religion. Op. cit., 316, 318.