A timely article by Dr. James Montgomery Boice, reproduced from a 1975 issue of ETERNITY MAGAZINE. Following this article is a reposting of last year’s entry on the life and ministry of Dr. Boice.

A well known Christian educator recently confided to me his concern that evangelicals alwasy seem behind in coping with the great issues of our time. They never seem to lead. In proof of his point he pointed to the great similarities between evangelical and secular concerns. When students were agitating on secular campuses, it was not long before students were agitating on Christian campuses. When ecology became an issue nationally, it also became an issue for evangelicals. In the same way, evangelicals tagged along in their concerns with Watergate, social action, race relations, and other issues.

There are different ways of reacting to such a statement, of course, and some of them put the evangelical church in a somewhat better light. For one thing, evangelicals have been in the forefront of valuable movements in the past. In fact, it is their success in some of these that has apparently placed them behind today; for secular agencies have simply taken over areas in which believers in Christ paved the way. The social arena provides many examples. Second, there are areas in which evangelicals are still being creative and are breaking new ground. The work of the Wycliffe Bible Translators, the Medical Assistance Programs of Wheaton, Ill., and L’Abri Fellowship in Switzerland may be cited as examples. But one may view these facts and yet still be somewhat uneasy. Are these things adequate? Are there no more areas in which a courageous evangelical witness might pioneer? If there are, why are we so often failing to move into them or even see what needs to be done?

The last question is the point at which we should probably begin to deal with the problem. And the answer to it is that the evangelical church is probably getting its concerns from the secular world rather than speaking to it out of those concerns which it derives from the Scriptures. To put it in other words, the church knows more of the world’s literature than it does its own literature. Or, to rephrase it yet again, in trying to sell itself to the world the believing church has forgotten its unique character and lost its distinctives.

One theme that needs to be recovered is the genuine and terrible wrath of God against sin. “Love” is the world’s word today, though it has been stolen from the Christian’s arsenal, and it is distorted. IT is distorted into a sentimental kind of self-indulgence and indulgence of others, so that in practice it becomes more a fulfilment of the last verse of Romans 1 (“Who, knowing the judgment of God, that they who do such things are worthy of death, not only do the same but have pleasure in them that do them.”) than an expression of that love of which God is the author. But love for man without hatred of sin, which destroys man, is meaningless. God hates sin. So we must speak of that hate and hate sin also. It is only from such a motivation that moral reform will ever sweep our nation.

Another theme that the Scriptures contain but which has been largely forgotten or ignored by evangelicals is the value of man, even after his fall. God values man. God became man. so we should value man also and be distressed when individual men (not just men in general) fial to be all that God intends them to be. Out of such an orientation Christians could be in the forefront of all movements to preserve life and develop human potential.

There is an expression that describes following behind: Always a bridesmaid but never a bride. It should not be true of those who are the bride of Jesus Christ.

The Death of a Giant 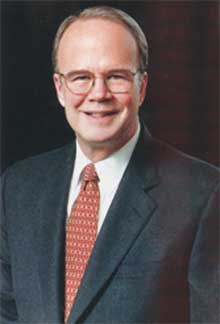 Upon hearing of the sudden death of James M. Boice on June 15, 2000, another pastor prayed in his pastoral prayer the following week in his congregation  that he wished the Lord had called him home instead.  That stark comment illustrates the appreciation which his fellow pastors and Reformed people everywhere had for the man and ministry.

Dr. James Boice was first and foremost a pastor-teacher.  For 32 years, he had fed the people of God at the historic Tenth Presbyterian Church in Philadelphia, Pennsylvania.  When countless churches were moving out of the inner city for the suburbs, Dr. Boice and his congregation stayed right where they were to be a witness to downtown Philadelphia.  Far from the congregation dwindling, it grew from 350 people in regular attendance to more than 1200 persons in three services.  Under his spiritual leadership, and the local Session of Elders, the light of the gospel was extended beyond the congregation,  to international students, women with crisis pregnancies, homosexual and HIV positive clients, and the homeless.

His ministry also went beyond the four walls of the church.  For a decade, he served as Chairman of the International Council of Biblical Inerrancy.  He founded the Alliance of Confession Evangelicals in 1994, calling for a new Reformation among American churches, its pastors and people.

America did not solely have his gifts of teaching either.  More than thirty countries of the world had his teaching ministry delivered to them.  Yet for many of us, it was his forty books on both Bible books as well as biblical themes which brought the gifts of this man to us.  We who were pastors had the privilege of using his biblical commentaries as core books for pulpit series.  We knew that there would not be doctrines or practices which would be contrary to either our biblical faith or for that matter, our creedal summaries of doctrine.  We could quote from his many pages with complete confidence.    Lay people could read for their devotions or Christian sabbath reading his books for their edification.  That reading would supplement what their pastors said to them from the pulpit.  It was thus a memorable  ministry to the people of God in this generation.

Words to Live By:  Even though we finite beings on earth have thoughts on when a person’s ministry may be over on that earth, God in His sovereignty is the real source of wisdom on the length of a  person’s ministry.  And God did exhibit that wisdom in taking James M. Boice home to Himself at the time He did.  We still have the benefit of his books which continue to be printed by publishing houses for the church.  Get your hands on any of these books, and your hearts and minds will be richly blessed.