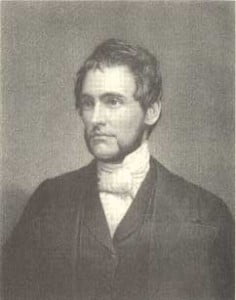 Isaac Van Arsdale Brown was born in Pluckamin, Somerset county, New York, on November 14, 1784. Little seems to be known of his parents or his early years. He graduated at Nassau Hall, as Princeton University was known in those days, and then studied theology privately under the tutelage of Dr. John Woodhull, of Freehold, New Jersey. He was licensed and then later ordained by the Presbytery of New Brunswick in 1807, being installed as the pastor of the church at Lawrenceville, New Jersey.

Three years later, in 1810, Rev. Brown established the Lawrenceville Classical and Commercial Boarding School, located near Princeton, and up until 1833 Rev. Brown remained the head of this school. The school has continued to this day and is one of the oldest private boarding schools in the nation. Then in 1833, both his wife and his son died, and it seems likely that their deaths led to his decision to leave Lawrenceville. In 1834, he sold the school and relocated to Mount Holly, New Jersey to plant a church there, while also preaching at Plattsburg, NJ and working to establish another church there. The last two decades of his life were spent preaching in the areas around Trenton and New Brunswick.

Dr. Brown was one of the founders of the American Colonization Society and also an original member of the American Bible Society. He died on April 19, 1861. (for historical reference, Fort Sumter had been fired upon, and the Civil War thus began, a week prior, on April 12, 1861)

Dr. Isaac V. Brown is noted as the author of several works, but most importantly, that of A Historical Vindication of the Abrogation of the Plan of Union by the Presbyterian Church in the United States of America. (1855). This is a careful treatment in defense of the Old School position on the 1837-1869 Old School/New School split in the PCUSA. It can be read online, here.

To read about the efforts of the Lawrenceville School in relocating Rev. Brown’s grave to a more appropriate location, click here.

Words to Live By:
In all likelihood, Rev. Brown started the school in Lawrenceville simply as a way to make ends meet. Pastors were not well paid in those days, and it was quite common for a pastor to turn to teaching in order to augment his salary. Nonetheless, the works that you do may live well beyond your own life-time. God will use what He will use. It is our part to be faithful in doing what He calls us to, and to do all things as unto the Lord.

“For we are His workmanship, created in Christ Jesus for good works, which God afore prepared that we should walk in them.” (Ephesians 2:10, ASV)