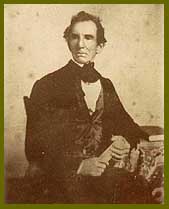 Rufus William Bailey, the son of Lebbeus and Sarah (Myrick) Bailey, was born in North Yarmouth, Maine, on April 13, 1793. He graduated as a Phi Betta Kappa from Dartmouth, receiving his master’s degree in 1816 and proceeded to study law under the tutelage of Daniel Webster. Following a call to the ministry, he prepared at Andover Theological Seminary and was ordained as a pastor of the Norwich Plain Congregational church in 1818, simultaneously holding a position as professor of moral philosophy at a nearby military academy. A life-long advocate of higher education, he served as a trustee for the University of Vermont and for Williams College in Massachusetts.

Relocating to Virginia, Rev. Bailey founded the Augusta Female Seminary in 1842 (renamed Mary Baldwin College in 1895) and labored as the principal of that institution for seven years. In1854 he moved to Texas for health reasons and was appointed to serve as Professor of Languages at Austin College, in Huntsville, Texas.

[copy below, excepting the bibliography, is for reference only as we compose the text that we will post]
He held the pastorate of a church in Pittsfield. Mass., from 1824 to 1828, when he went south and was occupied as a teacher in the Carolinas and Virginia until 1854, in which year he was given the chair of languages in Austin college, Texas, holding it from 1854 to 1856, and was president of that institution from 1858 to 1863. He received the degree of D.D. from Hampden-Sidney college in 1859. While living in Texas he published a series of newspaper articles in opposition to slavery, and he was also the author of a number of volumes on religious and educational subjects, consisting of a book of newspaper letters called “The Issue”; “The Mother’s Request”; “The Family Preacher”; “A Primary Grammar”; a collection of sermons; a “Manual of English Grammar”; and “The Scholar’s Companion” (1841), which last passed through more than eighty editions. He died in Huntsville, Texas, April 25, 1863.

Born in Maine, Bailey graduated from Dartmouth College in 1813. He was ordained as a Congregational minister but later joined the Presbyterian Church. In 1842 he founded Augusta Female Seminary. After serving as principal for seven years, he resigned to become the Virginia agent for the American Colonization Society. Bailey was a prolific writer whose works include English Grammar (1853) and The Scholar’s Companion (1856).

Bailey became a professor of languages at Austin College in Huntsville, Texas, in 1858. He served as president of the college from 1862 until his death.

Rufus William Bailey, the third president of Austin College, the son of Lebbeus and Sarah (Myrick) Bailey, was born in North Yarmouth, Maine, on April 13, 1793. He graduated as a Phi Beta Kappa from Dartmouth in 1813, studied law under Daniel Webster, and returned to Dartmouth to teach. Later he taught in Virginia and helped to establish Mary Baldwin Seminary. In 1854 he moved to Texas and in 1855 accepted the chair of languages at Austin College, Huntsville. On December 15, 1858, Bailey was elected president of Austin College and was ordered to reorganize and reopen the college. He was married twice: in 1820 to Lucy Hatch of Norwich, Vermont, and after her death to Mariette Perry of Waterbury, Connecticut. He was a prolific writer and was best known for his textbooks on spelling and grammar. He resigned from Austin College in 1862 because of ill health and died on April 25, 1863. He was buried at Huntsville.

Born in Maine, Bailey graduated from Dartmouth College in 1813. He was ordained as a Congregational minister but later joined the Presbyterian Church. In 1842 he founded Augusta Female Seminary. After serving as principal for seven years, he resigned to become the Virginia agent for the American Colonization Society. Bailey was a prolific writer whose works include English Grammar (1853) and The Scholar’s Companion (1856).

Bailey became a professor of languages at Austin College in Huntsville, Texas, in 1858. He served as president of the college from 1862 until his death.

Rufus Bailey was born in Yarmouth, Maine, April 13, 1793. He was educated at Dartmouth, receiving his Masters Degree in 1816. Subsequently, he studied law with Daniel Webster, before changing directions and entering Andover Theological Seminary. He entered the ministry in 1818 as pastor of a Congregational Church in Connecticut and at the same time held the post of Professor of Moral Philosophy (history) in the local military academy. Bailey maintained an active interest in higher education, serving as trustee of Williams College in Massachusetts and the University of Vermont. It appears Bailey felt a commitment to the education of women as well as men. Before reaching Texas in 1854, he organized the Pittsfield Female Seminary, established the Richland Normal School in South Carolina, taught at a female school in Fayetteville, North Carolina, and founded Augusta Female Academy (now Mary Baldwin College) in Staunton, Virginia. He emigrated to Texas for health reasons and was appointed Professor of Languages at Austin College in Huntsville, Texas, in 1855. In 1858, the Board of Trustees elected him to the presidency of Austin College. Bailey assumed the presidency on the heels of an administrative debacle in June of 1858 that produced a revolt of the faculty and a resulting failure of the college to open the fall semester of that year. In the tradition of Daniel Baker and Samuel McKinney before him, he also served as pastor of Huntsville Presbyterian Church, where his keen mind and ready wit earned him the nickname the “Walking Library” among his congregation. Bailey tendered his resignation as president of the College in 1860, pleading ill health, but in the face of the unsettling events of that year agreed to serve until a replacement could be found. As a result, Bailey’s actual departure did not occur until 1862. He died in Huntsville on April 23, 1863, only three months and three days prior to the death of the College’s most famous and colorful trustee, Sam Houston, who died in the house Bailey himself had built.

1820
A Sermon, delivered at the ordination of the Reverend Absalom Peters; to the pastoral care of the Congregational Church in Bennington, July 5, 1820.

An Address, delivered at the close of the Sabbath school on Norwich Plain, November 9, 1819.

Articles of Faith and Form of Covenant adopted by the South Church in Norwich, Vermont at its formation, June 15, 1819. To which is added, an extract from the church records.

1821
The Magnitude of the ministerial office illustrated from the value of the soul. A sermon delivered July 4, 1821, at the ordination of Rev. Dana Clayes, to the pastoral care of the church and society in Meriden parish, Plainfield, N.H.

1824
God the proper object of gratitude; and thanksgiving a necessary evidence of its sincerity. A sermon, preached in Pittsfield, Mass., on the day of the state thanksgiving, December 3, 1824.

An Address, delivered at the annual commencement of the Berkshire Medical Institution, Pittsfield, December 23, 1824.

1837
A Mother’s Request: Answered in letters of a father to his daughters.

The Family Preacher; or, Domestic duties illustrated and enforced in eight discourses.

The Issue, presented in a series of letters on slavery.

1853
English Grammar: A simple, concise, and comprehensive manual of the English language.

The Scholar’s Companion; containing exercises in the orthography, derivation, and classification of English words.

Daughters at School instructed in a series of letters. Philadelphia: Presbyterian Board of Publication, 1857. 252 p.
Domestic duties; or, the Family, a Nursery for earth and heaven. [a shortened form of The Family Preacher.]