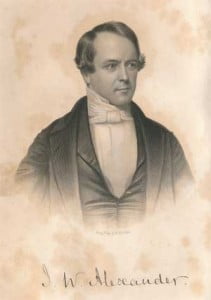 James Waddel Alexander was the eldest son of the Rev. Archibald and Janetta (Waddel) Alexander, and he was born in Louisa county, Virginia on March 13, 1804. The young parents had wed in April of 1802 and a month later relocated to Hampden Sydney, where Rev. Alexander resumed his duties as the President of the College there. When James was about two years old, his father was called to serve as the pastor of the Third Presbyterian Church in Philadelphia. Then another six years later, the family moved for the last time, relocating to Princeton, New Jersey, where in 1812 Archibald Alexander became the first professor at the newly organized Princeton Theological Seminary.

Growing up, James had every encouragement for learning, and while the youngest in his class at college, he made friends easily. Upon graduation from the College of New Jersey, he next entered upon his preparations for ministry at the Seminary, beginning those studies in 1822. By this time, Charles Hodge was already numbered among the faculty, joining Professors Archibald Alexander and Samuel Miller.

For forty years, James Waddel Alexander kept up a correspondence with his friend John Hall (he later became pastor of the Fifth Avenue Presbyterian Church in New York City). Not long after J.W. Alexander died, in 1859, the surviving correspondent gathered up the letters for publication, and the resulting two volume set was issued in 1860 by Charles Scribner of New York. The set has been reprinted at least once in more recent times.

Among the many letters, there is this very interesting look at James as he settled into his time at the Seminary in 1822.

“I said I was happy,—never more so in my life. I enjoy good health, good spirits, and I have a most comfortable room, and a most delightful room mate. I never had so great a variety of excellent company before: Metaphysicians, Wits, Theologians, &c, &c. I have here dearly prized friends, who endear Princeton to me. Books in the greatest abundance, as I have access to six public libraries, as well as my father’s. Our studies are not burdensome, and far from being irksome. I saw a letter the other day from an alumnus of this institution to a member of it, in which he says: “My dear C________, you are now enjoying your happiest days, and whether you realize it now or not, you will feel it deeply when you are cast out upon the world.” These sentiments are not peculiar to this individual, I hear them from every one who has ever been here. Indeed, the greatest cares I experience, are such as arise from an oration to be spoken, or a tedious lecture. Will you not say with Virgil, O fortunati nimium sua si bona norint. I will now proceed to give you some account of my course of life. I rise at half after six. Public prayers in the Oratory at 7. Breakfast at 8. From 9 to 9:30, I devote to bodily exercise. From 9:30 to 12, Study. 12-1, Exercise. Dine at one. 2-3, I usually devote to works of taste, and to composing. 3-4:30 at Lecture. 4:30 Prayers. Until tea, at Exercise. After tea, until 12 (at which time I close my eyes) Societies, study, &c.

“Perhaps you think I exercise my body sufficiently. I find it absolutely necessary to my well-being, or almost to my being at all. You may think, too, that I do not study a great deal; true—and moreover that I need not complain of want of time for correspondence; true, at present I need not complain; I have plenty of time for writing, and general reading. At the beginning of the term, before I had fairly got into the harness, our business appeared too much to grasp; but it is now methodized, and I find that I am quite a gentleman of leisure. To proceed: we recite twice in the week on Hebrew, once on Greek, once on the Confession of Faith, once on Biblical History. Hear Lectures once on Theology, (preparatory to the full and regular theological Lectures,) twice on Biblical history, once on the Criticism of the Bible; President, Mr. Hodge. On Tuesday night, the Theological Society, where every student delivers once in six weeks an original oration. On Thursday night, I am at liberty to attend an evening lecture at the college. On Friday night, Theological Society, where questions in ethics and divinity are discussed. On Saturday night, a weekly prayer meeting. On Sunday, we have sermons from our three professors, and Prof. Lindsly, in rotation.” [Philip Lindsly, D.D., was the Vice President of the College of New Jersey at that time.]

Words to Live By:
We all live very busy schedules, but every Christian should spend regular, consistent time in prayer and in the Word of God. This is one reason why we present a daily reading plan in the margin column of this blog. Slowly, a little at a time, you will grow in your understanding of the Scriptures and in your ability to share your faith. Persistence and consistency pay off in their cumulative effect. James Alexander succeeded in his studies because within a short time he had his demanding schedule “methodized,” making an appropriate allowance of time for everything that needed to be done.

“Be diligent to present yourself approved to God as a workman who does not need to be ashamed, accurately handling the word of truth.” (2 Timothy 2:15, NASB)

“but sanctify Christ as Lord in your hearts, always being ready to make a defense to everyone who asks you to give an account for the hope that is in you, yet with gentleness and reverence; (1 Peter 3:15, NASB)

Last July 31st we paid an initial visit, looking at the life of J.W. Alexander. To view that post, click here.
[you’ll note in that post, his middle name was spelled “Waddell”, while in today’s post it is spelled “Waddel”. James’s mother’s maiden name was Waddel, and so I’m inclined to think that is the correct spelling, though both spellings are found.]