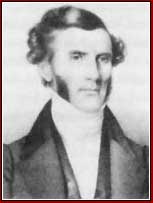 The Power of Preaching

Daniel Lynn Carroll was born in Fayette county, Pennsylvania, on May 10th, 1797. After surmounting great obstacles to his education, he was finally able to graduate from Jefferson College in 1823, at the age of twenty-six. He then enrolled at Princeton Theological Seminary and took the three-year curriculum, staying for another six months of study after graduation. Of Mr. Carroll, Archibald Alexander said that he was one of his finest students.

Seeking a call, he was installed as the pastor of a Congregational church in Litchfield, Connecticut in October of 1827. Then early in March, 1829, he accepted a call from the First Presbyterian Church in Brooklyn, Long Island, though this pastorate ended in 1835, due to a severe throat ailment.

Almost immediately he was appointed to serve as the President of the Hampden-Sydney College in Virginia. Carroll, unknown to most at the school, was elected to the position almost entirely on the testimony of one old friend who was among the College’s trustees. His term here too was relatively brief, with Rev. Carroll resigning over what was described as “some theological difficulties.” Without further investigation, it appears that Rev. Carroll may have been a New School man, and thus his problems.

Upon his resignation from Hampden-Sydney, Carroll accepted a call to the First Church of the Northern Liberties, a section of  Philadelphia. This was the church where the Rev. James Patterson had ministered so effectively and the region where Patterson had evangelized so fervently. To have followed a beloved pastor like Patterson and done so with success, speaks well of Rev. Carroll and his abilities. Carroll remained at First Church until 1844, when declining health forced his retirement from that pulpit. After a brief tour of service for the Colonization Society, he died, in Philadelphia, at the age of fifty-five, on November 23, 1851.As a preacher,, Dr. Carroll was quite popular, and often preached to crowded churches. He had a refined taste, a lively imagination, and a careful organization in all that he did and said. He excelled at the pulpit. Two volumes of his sermons were published, along with some topical discourses issued separately.Dr. Carroll also contributed an introduction and a chapter to the Memoir issued upon the death of the Rev. James Patterson. Carroll’s chapter from that book focused on field preaching, an activity which characterized Rev. Patterson’s ministry.
Something to Consider:
Preaching with real results depends entirely upon the work of the Holy Spirit. The preacher is simply the instrument for bringing the message. Of Rev. Patterson, Dr. Carroll wrote:—”When he first settled in the northern part of the city of Philadelphia, his church and congregation were comparatively small. But his pastoral labours and visits—his animation, his unaffected earnestness, his holy compassion for souls, and his clear and forcible presentation of the pungent truths of the gospel, soon rendered his preaching so attractive as to fill and crowd the place of worship with attentive hearers. He preached three times on the Sabbath, beside lecturing and attending prayer meetings during the week. He was most assiduous and indefatigable in visiting and pastoral efforts. Now, with this, nay, with less than this, as the measure of their labours, most ministers are abundantly satisfied. Not so with Mr. Patterson. Beside the multitude that crowded the place of worship where he preached, there was a mass of neglected suburban population who went nowhere to hear the gospel, and had “no man naturally to care for their souls.” They desecrated the Sabbath by collecting in groups round the dram-shops, and spending its holy hours in rioting and drunkenness. The benevolent spirit of Mr. Patterson “was stirred within him,” when he contemplated these dense crowds of ruined yet immortal beings, moving in unbroken procession down the pathway to hell. His concern for them soon ripened into an active, laborious compassion, which led to a series of efforts for their good that have no parallel, as we believe, in the history of any settled pastor in this country. This remark refers to his preaching on the Sabbath in the fields. With essentially the same spirit that animated Paul, when he stood on “Mars Hill,” and proclaimed the gospel to those who “were wholly given to idolatry,” Mr. Patterson, amidst all his other exhausting labours, commenced preaching on the commons on Sabbath afternoons, after the close of the second service in church. The crowds which he drew around him, and the temporary and permanent effects of those efforts, have not been surpassed since the days of Whitefield.”To interest such an audience as that which he drew around him on these occasions was no easy task. They were a heterogeneous population, many of whom had never enjoyed a religious education–had never been trained to respect the worship of God and the ordinances of religion–had no habits of attending public worship–had never been accustomed to read or think on serious subjects, and, of course, had none of those habitudes of mind favourable to the reception and solemn consideration of divine truth. In his labours with them, Mr. Patterson had to contend with all that ignorance, wnat of thought, waywardness, irreverence, and undisciplined moral feeling which usually attach to such a class of population. Nor had he the collateral helps furnished by an imposing church edifice, and the example of a large number of pious and respectful worshipers. Yet, in the absence of all these facilities, for arresting attention and producing impression, few preachers for the last half century, have secured a more profound attention, or been the instrument of producing so deep a feeling of interest in an audience as did Mr. Patterson in these services. It was no unusual occurrence for the whole multitude that surrounded him to be melted into tears. This was, in a great measure, the result of his singularly happy method of adapting his instructions to the character and capacities of his hearers. In this respect he exercised an extraordinary ingenuity, interspersing his discourses with pertinent and impressive anecdotes drawn from the providential dealings of God with men which he had personally witnessed.”
Is the Gospel under any greater challenge today? I don’t think so. You can read the Memoir of the Rev. James Patterson, including the chapter on field preaching written by Dr. Carroll, here.