Tales of a Traveler 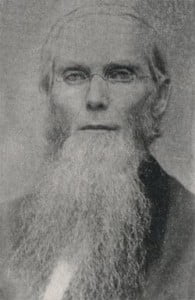 James Beverlin Ramsey was born in Cecil county, Maryland on May 20, 1814. His collegiate education was secured at Lafayette College, a school in Easton, Pennsylvania founded in 1826 and which began holding classes in 1832. Thus Mr. Ramsey was apparently in the first class of graduates in 1836, where he was also valedictorian. He immediately entered Princeton Theological Seminary and remained there four years, which would entail the standard three year curriculum plus an additional year of post-graduate work. One of his professors at the Seminary, the eminent linguist Dr. J. Addison Alexander, stated that when Ramsey left the Seminary, he was qualified to teach any class in the institution.

Ordained by the Second Presbytery of New York on February 2, 1841, Rev. Ramsey was installed as the pastor of the Presbyterian church in West Farms, New York, a neighborhood in New York City, where he remained from 1841-1846. He remained in West Farms in 1846 while preparing for missionary work with the Choctaw Indians and also served as principal of the Spencer Academy, which was connected with that work, from 1848-1849.

From 1950 to 1853, he was Stated Supply for several New York churches, until he received a call in 1853 to serve the Presbyterian church in New Monmouth, Virginia, first as Stated Supply and then as pastor, 1854-1858. His final labors were spent as pastor of the First Presbyterian Church of Lynchburg, Virginia, 1858-1870. Declining health forced his resignation and he died in Lynchburg on July 23, 1871.

It may be interesting to note that the Old School/New School split of the Presbyterian Church U.S.A. occurred during Ramsey’s first year at Princeton Seminary, that his first dozen years in ministry were spent in that region where the New School was strongest, and that his last two pulpits—the final eighteen years of his ministry—were in the South, in churches that were on the Old School side of the split.

Dr. Ramsey is today primarily remembered as the author of a commentary on the first eleven chapters of the Book of Revelation, which has been reprinted by The Banner of Truth Trust. Included are a brief memoir of the author and an introduction by Dr. Charles Hodge. Published posthumously, the commentary was originally titled The Spiritual Kingdom (1873). Some of his other published works include The Deaconship: An Essay (1858); True Eminence Founded on Holiness: A Discourse occasioned by the death of Lieut. Gen. T.J. Jackson (1863); How Shall I Live? (1861-65); Questions on Bible Doctrine (1869); and Questions on Old Testament History (1879).

Words to Live By:
We should, all of us, be constantly open to the Spirit’s leading as He may bring opportunities to witness to others of the gospel of salvation in Jesus Christ. Our witness to a dying culture matters more now than ever. The following, from Dr. Ramsey’s short treatise How Shall I Live?, gives an excellent example of how a mundane situation can be turned into such an opportunity:—

A traveler in his journey crossed the frontier, and had to pass through the custom-house. The officers said to him, “Have you any contraband goods?” “I do not think I have.” was the answer. “That may be true,” said the officers, “but we cannot let you pass without examination. Permit us to search.” “If you please,” said the traveler, “but allow me to sit down while you perform your duty.”

They then began their search; and first examined his portmaneau. Afterward they turned to his person, and searched his pockets, his pocket-book, his boots, and his neck-cloth.

The examination being over, the traveler thus addressed the officers: “Gentlemen, will you allow me to tell you what thoughts this examination has awakened in my mind? We are all traveling to an eternal kingdom, into which we cannot take any contraband goods. If you had found any prohibited articles upon me, you would have taken them from me, and have fined me for it. Now, think how many careless travelers pass into eternity, laden with sins which are forbidden by the heavenly King. By these forbidden things, I mean deceitfulness, anger, pride, lying, covetousness, envy, evil-speaking, and similar offences, which are hateful in the sight of God. For all these, every man who passes the boundary of the grave is searched, far more strictly than you have searched me. God is the great searcher of hearts; and although the number of transgressors is very great, and their rank and station very different, yet not one can escape, for ‘every one of us shall give an account of himself to God.’

“The King of heaven, not willing any of us should perish, sent His only begotten Son to become our substitute to make a reconciliation for transgressors, and to clothe us with His righteousness, without which we cannot see His kingdom. This Messiah, or sent one, is Jesus Christ, our Saviour, who came down on earth on purpose to bear ‘our sins in His own body on the tree,’ to save all that believe on Him, to wash us from our spiritual pollution, and to clothe us with the spotless robe—the wedding-garment of His righteousness. And ‘they who have washed their robes and made them white in the blood of the Lamb,’ are before the throne of God, and serve Him day and night in His temple.'”

The custom-house officers listened with attention, and when he had finished, expressed the hope that they should be permitted to see and hear him again.

“Gentlemen,” continued the traveler, “whether we shall meet again on earth is uncertain. God only knows; but, as I am about to leave you, I will tell you something more—it is about TWO PLANKS. A preacher wishing to explain to his congregation what a dangerous delusion those persons are in, who seek salvation partly from the righteousness of Christ, said to them: ‘Supposing it is needful for you to cross a river, over which two planks are thrown. One is perfectly new, the other is completely rotten. How will you go? If you walk upon the rotten one, you are sure to fall into the river.

If you put one foot on the rotten plank, and the other on the new plank, it will be the same—you will certainly falll through and perish. So there is only one safe method left—Set both your feet upon the new plank.”

Brethren, the rotten plank is your own unclean self-righteousness. He who trusts in it must perish without remedy. The new plank is the eternal, saving righteousness of Christ, which came from heaven, and is given to every one who believeth in Him. Trust on this righteousness and you shall be saved; for the Scripture saith, “Whosoever believeth on Him shall not be ashamed.”

To read more of How Shall I Live?, click here. An alternate edition is posted on the web, here.