The Value of a Long Pastorate 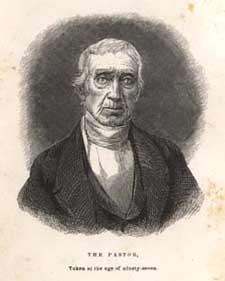 Fifty years a pastor of one church! The Rev. David Osborn surely is one of but a small number of pastors who have labored so long and so faithfully for one congregation. Rev. Osborn was the pastor of the Fairfield Presbyterian Church, in Fairton, New Jersey, for 55 years, from 1789 until 1844. The Fairfield church is now a member of the PCA. With a long pastorate, and as a faithful servant of his Lord, Rev. Osborn laid a good foundation for the future health of the church. Born on august 21, 1758, Rev. Osborn died on May 1, 1858, at the age of 99 years, 8 months and 10 days.

These little daily devotions are meant to be brief and so can never explore the whole of a story. Our account today is drawn from The Pastor of the Old Stone Church. With the hope of encouraging you to take up this interesting little book and read it for yourself, we give here but a small sampling of Rev. Osborn’s life and ministry. When he had already served some thirty years in the Fairfield pulpit, he preached a sermon in which he recounted some of the history of his ministry. He said:—

“Having lived and labored among you in the gospel ministry for more than thirty years, it seems reasonable that we should take a brief review of the ground we have traveled over, and of God’s dealings with us. It is hoped that such a review may afford us some lessons of useful instruction. The general design of these discourses is to lay before you some of the principal events which have occurred during my residence among you, and as I pass along, to express my thoughts and opinions respecting them…My motives of action, my regard or disregard of your welfare, are known to God, and must ere long be known to yourselves, whether I speak them out or not. You have been eye and ear witnesses of the principal events of providence and grace which we shall review, and thanks to God! many of you have been heart witnesses by your own happy experience”

“My condition and school education were like those of other children in my native place. I was favored, thanks to God! with religious parents and a religious education. My parents are gone to their long home, and I trust sleep in Jesus. They trained me in the habit of attending public worship, but for some years I went to meeting rather reluctantly, or against my inclination. Some alarming providences impressed my mind with serious thoughts of death and judgment. This was perhaps between the age of nine or twelve years. After my serious impressions began, I went to religious meetings without persuasion or driving. I then went, not to see and be seen, but to hear the word of God, and to learn how I must escape the wrath to come and obtain eternal life. The Sabbath became a most welcome day, which I tried to keep holy, and improve for my best spiritual interests, for this was my principal concern. Compared with my soul’s salvation, every affair of this life appeared low and trifling.

“About this time I began secret prayer, which I have continued more or less to this day, though I am conscious that I have often been too remiss in it. I felt conscious that the eyes of the Lord were upon me, and I fully resolved carefully to avoid whatever would incur his displeasure, and to do whatever my conscience and his word and Spirit should tell me was my duty. But, like David, I soon found that innumerable evils had compassed me about, and mine iniquities had taken hold upon me. I found that my own strength was weakness; temptations assaulted me, and too often prevailed against me; yet like Job, I tried to hold fast mine integrity.

“When I was preparing for college, while studying the Greek Testament, I saw more clearly than ever the amiable excellency of our Saviour. My mind was enamored of his heavenly beauty, and my soul’s desire was to be like him and with him. Ever since, I have had a trust that I have received the Saviour by faith, and am interested in the special favor of God through his merits and mediation, though it often seems too exalted a favor and blessedness for such a sinner to expect. And scarcely, if ever, do I feel that assurance of salvation which I desire. May the Lord perfect in us all that which is lacking of grace, faith, and assurance!”

Later in the account, Rev. Osborn spoke of the life of the Fairfield church:

“The Lord once more appeared for his favored church in Fairfield. Through the summer and fall of 1809, a general awakening to the concerns of the eternal world prevailed among the people. Conference, or prayer-meetings, were held in different parts of the congregation, not less than six or seven evenings in the week. It was truly a revival time, both to saints and sinners; the Spirit of grace was poured upon each. Some were severely experienced and brought into deep distress; others were exercised in a mild manner. Though there were diverse operations, yet the same God wrought in all. In a few months, a considerable number entertained a hope, and thanks to God! he continued his gracious work for many months. On December 3, 1809, just twenty years from my ordination, twenty-four were admitted to the church. In April, 1810, thirty were admitted to full communion; in August following, twenty-seven more, and small numbers at the two communions following, so that in the space of two years, there were added to this church one hundred and twelve. The Lord hath done great things for us, and blessed be his name!

“Though various means were used, yet it was evident that the excellency of the power was of God, and not of men. This appears from the great change wrought, and the good fruit following. Though I was not idle during the revival, yet it seemed as if I was a spectator beholding the wonderful operation of Divine grace convincing and converting sinners. My brethren of the Session were alive and diligent in prayer and religious conversation, and perhaps I may have aided, in some measure, the good work of the Lord. But I was only one among a multitude of agents who were active in the same employ. Truly my soul rejoiced to see many return unto the Lord and enlist under the banner of King Jesus.”

Words to Live By:
From the above mentioned volume, the Rev. Mr. Burt’s address upon the death of Rev. Osborn,
“The pastor is not only the interpreter of the oracles of God in the gathered assembly; he is a visitor in every home, and a personal friend of every individual. In every crisis of life he is at hand, soothing in sickness, comforting in sorrow, counseling in perplexity, and, at last, accompanying the dying, as far as he may, toward the brooding shadows of the dark and solitary valley; and in all this he is the friend of the soul, drawing from earth, leading to Christ, and inspiring with heavenly hope. O there is none who so fully and so tenderly interweaves his whole life with that of each of a community, and draws after him and binds upon him such a train of ardent and holy affections, as the faithful and loving pastor.”

[all excerpts taken from The Pastor of the Old Stone Church. Philadelphia: William S. and Alfred Martien, 1858.] 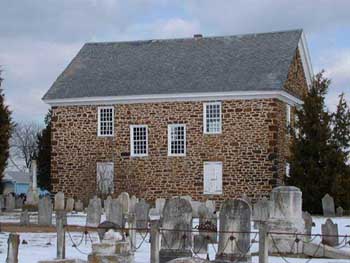 At right, the Old Stone Church as it has appeared in recent years. It is no longer in use, though some efforts over the last several decades have been made to maintain the structure.

Sources: The portrait above and the text are drawn from The Pastor of the Old Stone Church. Philadelphia: William S. and Alfred Martien, 1858. This work is available on the Internet, here. The more recent photograph, at right, was taken by the current pastor of the Fairfield Presbyterian Church, the Rev. Michael Schuelke. For more about the history of this church, which was organized in 1680, click here.