July 11: The Bible Origin of Presbyterianism. 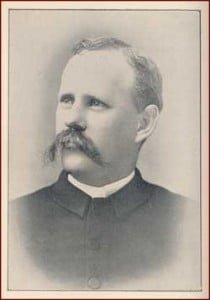 We return today to our Saturday visits with a little book by the Rev. R.P. Kerr, titled PRESBYTERIANISM FOR THE PEOPLE. Today’s section is chapter three of that book, covering the earliest examples in the Bible of the Presbyterian system of government.

Presbyterianism for the People.
by Robert P. Kerr
(1883)

We claim that whereas no kind of Church government is commanded, yet Presbyterianism was practiced from the earliest times. There is no command to change the Sabbath from the last to the first day of the week, but the Christian Church observes the first day because it was the practice of the apostolic Church so to do.

The Church existed first in the family, the father being the head. As families multiplied, their several heads, or elders, would naturally form a ruling assembly; but because a body composed of all the heads of families in an extensive community would be too large for general efficiency, the people would elect from the number of older men certain ones conspicuous for piety and wisdom to be their representative rulers. They would then have a Presbytery. In a simple state of society this body would have charge of both religious and secular affairs, but as society advances a necessity arises for the separation of the affairs of Church and State. In Old-Testament times they were united, but were separated under the New Dispensation.

We find this presbyterial government in operation among the children of Israel in Egypt when Moses came upon the stage of history. God told him to go and call together the “elders of Israel” and lay his business before them. He was to be their leader in the exodus from Egypt and in the journey to Canaan; but, through divinely appointed to this office, he did not undertake it without calling together the elders of the people and explaining God’s purpose to them. In the Presbyterian Church of to-day, if a man feels called of God to be a pastor and to preach the gospel, the Presbytery must sit in judgment upon his credentials and qualifications. Moses afterward organized a higher court, or assembly—very like a General Assembly—of those whom he knew to be elders, to preside over the government of the whole Church. This body was composed of seventy elders, and was in alter times called “the Sanhedrim.” Beginning with Exodus iii. 16, the word “elder” (signifying “ruler”) is used in the Old Testament about one hundred times, and over sixty times in the New. Their duties were the same as those of elders now—administrative and judicial, to administer the government and to decide cases. This is a simple statement of the functions of elders in all ages, growing out of the very nature of things and having God’s endorsement. The administrative function is seen in their coming together to receive Moses; the judicial (Deut. xix. 11), where they were instructed to try men for murder. These two cases are selected as typical of the large number, which may be seen by referring to any concordance of the Bible, under the word “Elder.”

The introduction of the priesthood interfered not with the office of elder. The priesthood was part of the ceremonial system of worship, of which the temple was the representative. The business of the priest was to offer sacrifices and to intercede for the people, as a type of Christ. But when Christ came the great sacrifice was made, and there was no further use for sacrifice or priest to remind men that Christ was coming; so the veil of the temple was rent when Christ said, “It is finished!” Then priestly sacrifices and gorgeous ritual passed away, God destroying, through the agency of Rome, every vestige of the temple where so long they had served. But there still remained untouched the old government of elders. In each synagogue there was a bench of elders and a “minister.” In Luke iv. 20, Christ “gave the book to the minister and sat down.” The synagogue elders were responsible to the Sanhedrim in Jerusalem, as we learn from The Life of Josephus (section xii.) and from other sources.

This was a government on the great principle of representative assemblies; which is Presbyterianism. The men who administered the government were often corrupt, but the principle was sound and was never called in question in the Scriptures.