The Westward Expansion of Presbyterianism

As Presbyterians, all Presbyterian history is our history. Those who have gone before, regardless of their denomination, have had an effect and have left a testimony which affects the work of ministry today. Whether they sowed the good seed of the Gospel or whether they turned their hand from the plow, we today work that same soil. The faithful proclamation of the Gospel will always be difficult, but what others have done before us can and does affect the work today. Thus the importance of history–to know the work done before and to build upon that work in the wisest ways. 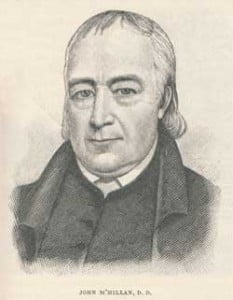 The Presbytery of Redstone was an historic PCUSA Presbytery, the first court of that denomination west of the Allegheny mountains. The organization of this Presbytery marked the beginning of the Church’s occupation of the great valley of the Mississippi. The field actually occupied was, geographically, the key to the great westward expansion. This was the section of the country extending from the base of the mountains westward to Fort Pitt and the Forks of the Wheeling, comprising the southwestern region of Pennsylvania, together with an adjoining section of West Virginia. It can rightly be said that it was from this Presbytery that the PCUSA began to expand across the nation until at last it reached the Pacific ocean.

Pictured at right, the Rev. John McMillan, one of the leading ministers in the Presbytery of Redstone.

The Presbytery of Redstone was organized on May 16th, 1781, by the Synod of New York and Philadelphia, in answer to a request from missionaries who were then serving west of the Alleghenies.  1781 was the closing year of the Revolutionary War and the Presbytery was formed but a month before the surrender of British forces at Yorktown.

The men who formed this Presbytery were Scotch-Irish settlers who were used to hardships and wilderness life, yet who were also resolute in their Reformed faith. The pastors numbered among the first members of Redstone were all well-educated men, most of whom had graduated from Princeton College. “Taken collectively, they were a body of well disciplined, orthodox and devoted ministers.” Among them, Thaddeus Dod, James Dunlap, Thomas Marquis, Elisha McCurdy, John McMillan, Joseph Patterson, and James Power. Among Redstone’s first ruling elders, many were notable men in business, government, and education.

Cumulatively, their influence was such that in most of the churches of western Pennsylvania, and in many churches throughout the western States in later years, a large part of the effective membership of those churches consisted of the descendants of those first ministers and elders whose names are found in the early records of the Presbytery of Redstone.

A history of the Presbytery was published in 1854, under the title of Old Redstone. And in 1878, the minutes of the Presbytery up to that point were gathered together in a published volume of over 400 pages. In 1881 the Presbytery held a centennial celebration, an occasion held jointly with some of the surrounding PCUSA Presbyteries of Pittsburgh, Washington, Blairsville and West Virginia.

There are actually a good number of published histories for Presbyteries in both the PCUS (aka, Southern Presbyterian Church, 1861-1983) and the PCUSA [1789-1958]. By comparison, we have preserved at the PCA Historical Center a few brief sketches that have been written for some of the PCA presbyteries. But the PCA is still a young denomination and I am sure that more such work will be done in the coming years. Off-hand I don’t know of any histories that may have been written for OPC or ARP presbyteries, outside of larger denominational histories.

Something to Consider:
For all the practical value of church history, at the root of it all, we value our history as a record of what God has done in our midst. The history of the Church in all its parts is a testimony to our risen Lord who has redeemed us and who has employed us in His kingdom, to His greater glory.