Dr. Charles A. Stillman and The Presbytery’s Right of Examination.

Today we are drawing from a short biographical sketch that Dr. Barry Waugh provided for a section of the PCA Historical Center’s web site. He is the author of these first three paragraphs. Then following the biography, something of an aside for the policy wonks out there, (which I hope will prove interesting), on the Presbytery’s right of examination. 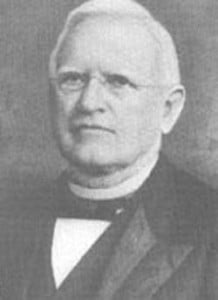 Charles Allen Stillman was born in Charleston, South Carolina to James S. and Mary Stillman on March 14, 1819. He attended Oglethorpe University in Georgia and received his degree in 1841. He then received his divinity degree from Columbia Theological Seminary in 1844 and proceeded to be licensed by Charleston Presbytery later that year. The Second Presbyterian Church of Charleston provided the opportunity for Charles to exercise his ministerial gifts until 1845. In 1845 he was ordained by Tuscaloosa Presbytery to receive a call to the Presbyterian Church in Eutaw, Alabama where he served until 1853. Remaining in Alabama, Rev. Stillman received a call to be the pastor of the Gainesville church where he ministered until 1870. It was in 1863, while he was at Gainesville, that Charles received the Doctor of Divinity degree from the University of Alabama. Dr. Stillman’s next call was to the Presbyterian Church at Tuscaloosa where he began his longest ministry in 1870 and continued there until his death on January 23, 1895.

Now, on the thin ruse that it was Dr. Stillman who initiated the following discussion at the 1866 General Assembly of the Presbyterian Church, U.S. (aka, Southern Presbyterian), we present the following narrative, which concerns the Presbytery’s right to examine men transferring into the Presbytery from elsewhere, whether from within the denomination or from without. To compare the PCA’s stance on such matters, click here.

The Committee on Bills and Overtures reported adversely to an overture from the Presbytery of South Alabama, asking for the repeal of the rule requiring the examination of ministers coming into a Presbytery from another.

Rev. Dr. Stillman reported that there is a Presbytery in South Alabama prepared to unite with us—they are well known, and have the entire confidence of all the ministers of the Presbytery of South Alabama. They are thoroughly orthodox. The Presbytery has a delicacy in examining them. This rule requiring their examination is the only obstacle to the union. The request of the Presbytery is unanimously endorsed by the Synod of Alabama. We believe that the rule is unconstitutional as far as its action is concerned—the necessity for it has passed away—it has been abrogated by the Assembly in reference to one large body—the United Synod—and now it is hoped that there will not be no hesitation in abolishing a rule which excludes a Presbytery of another body ready to unite with us.

Rev. Dr. [Samuel J.] Baird sketched the history of the origin of the rule requiring the examination of ministers passing from Presbytery to Presbytery. Dr. Lyman Beecher came to a Presbytery in New York from some Congregational Association, and was admitted without examination, and immediately took a letter of dismission to an Ohio Presbytery, and was received, and subsequently stated that he had never signified his adoption of the Confession of Faith. The late Dr. Alexander therefore advocated the adoption of the examination rule, for without it a single Presbytery might deluge the church with heretical ministers. The rule was not directed especially against the New School Church, for at the time of its adoption that church had no existence. Nor had it been suspended in the case of the United Synod.—They had examined the Old School and the Old School had examined them, and it was not until they were thoroughly satisfied as to one another’s soundness that they came together. Nor could it be reasonably objected to. He was not ashamed to proclaim anywhere what he believed as to the great doctrines of religion, and he was not willing to alter our whole system to open the door to a few who were not willing to come in the same way that others had been received. The importance of it is increased at this time—it is more necessary than ever in these days of fanaticism that we should have such a rule. Even in the case of old ministers he thought it a good thing to talk over our views occasionally. When a venerable father in the church comes to be examined, if we cannot find any heresy in him, we can at least learn a great deal from him about the great doctrines of grace. The speaker continued that if the rule is absolute, nobody’s feelings can be hurt by it. He therefore saw no necessity for its repeal.

Rev. Dr. [Robert] Nall said these brethren have not even asked the repeal of this law — they do not make their coming to depend on the repeal of this law—they would, however, prefer to come in without an examination, and if we repeal the law the Presbytery still has the right to examine all who come to them.

The report was adopted, refusing to repeal the rule requiring the examination of all ministers entering a Presbytery. Rev. Dr. Brown proposed that a letter be addressed to the Presbytery of South Alabama, explanatory of the views of the Assembly, to be used by them as they see fit in communicating with these brethren. Dr. [George] Howe and Dr. Baird were appointed to that committee. On motion, adjourned.

“Beloved, do not believe every spirit, but test the spirits to see whether they are from God, because many false prophets have gone out into the world. By this you know the Spirit of God: every spirit that confesses that Jesus Christ has come in the flesh is from God; (1 John 4:1-2, NASB).