Every once in a while we will dispense with people and events tied to the calendar. I think this particular piece warrants your attention.

The following article is from among the Papers of the Rev. Vaughn Hathaway (graciously donated at this recent PCA GA), and it was the lead article in a  1935 publication of the National Union of Christian Schools,an effort largely connected in those years with the Christian Reformed Church. And since today is a work day, for your convenience a shorter, edited version (with emphasis added) is posted “above the fold.” Please come back later when you have time to read the full article (posted below the fold).

Time has proven Kuiper’s words to have indeed been so very accurate and true, and still so very applicable. 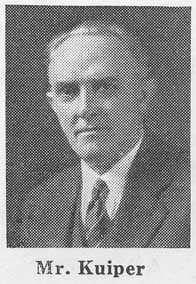 THE CHRISTIAN SCHOOL A NECESSARY WITNESS IN THE MODERN WORLD.

It is sometimes possible to characterize an age in one word. The antediluvians, for example, lived in practical atheism. They went about their pursuits as if there were no God. Soon after the flood men turned to polytheism, and for many centuries the human race remained steeped in this sin. I believe that antitheism describes today’s world as accurately as any one word can. At the very least it may be asserted of our age that it indisputably manifests a strong strain of antitheism. Modern man is not merely forgetting God, or even wilfully ignoring Him, but he emphatically denies God. He hates God and is eager to express his hatred. He flies in God’s face.

More fully expressed, it is characteristic of the modern world to cast overboard God and His Word and, consequently, His answer to the question what is true as well as His norm of goodness. The world will have nothing of God, the Absolute, nor of His objective standard of truth and morality.

The inevitable outcome is here. Modern man has lost his moorings. He finds himself at sea, surrounded by the thick mist of doubt and uncertainty and enveloped in the black darkness of hopeless pessimism. “Whirl is King, having driven out Zeus,” said the Athenian comic poet Aristophanes. “Whirl is King, having driven out the Absolute” describes the wicked and adulterous generation in which divine providence has cast our lot.

Small wonder that the modern man finds no satisfying answer to the question what truth is. Divine revelation has been thrown into the discard and science has come to take its place, but the knowledge proffered by science differs so radically from that received by revelation that it hardly deserves to be called knowledge at all. I well recall when I began the study of physics at the Morgan Park Academy. In the very first lesson we were taught certain axioms. One of them was the indestructibility of matter. Now Webster defines an axiom as “a self-evident truth.” But modern science is by no means sure of the self-evident character of this proposition. The following quotation from Walter Lippmann is as true as witty. I find it most delightful. Says this modern sage: “One can by twisting language sufficiently ‘reconcile’ Genesis with ‘evolution.’ But what no one can do is to guarantee that science will not destroy the doctrine of evolution the day after it has been triumphantly proved that Genesis is compatible with the theory of evolution.—The reconciliation which theologians are attempting is an impossible one, because one of the factors which has to be reconciled—namely, the scientific theory, changes so rapidly that the layman is never sure at any one moment what the theory is which he has to reconcile with religious dogma.”

If he who denies the absolute God and His Word has no reply to the question what truth is, neither can he say what is good.

The modern man does not know what is right and what wrong, and, as has been aptly remarked, he is giving himself the benefit of the doubt. Modern youth revolts against the restraint of God’s law and passionately lends its ear to the siren song of Freud. The divine institution of marriage is unblushingly violated even in the first family of our land. Supposedly Christian Italy seems eager to follow the example of pagan Japan in carrying out a selfish program of imperialism through ruthless and bloody conquest. Not only numberless individuals, but whole civilized nations, have lost the sense of financial obligation and are laughing just debts out of court. Capital continues to exploit labor, while fanatic reformers and windy demagogues are applauded by hosts for their communistic dreams. “All thine is mine” might well be called the slogan of our generation.

But human beings must be held in restraint somehow. Even man himself realizes that. And so it comes about that modern man, having turned his back on the law of God, which is the law of liberty, yields to a multiplication of human laws, which is tyranny. The great war was fought avowedly to make the world safe for democracy. But the post-war period is one of dictatorships. Despots are crushing whole nations under their heels. Everywhere governments are trampling upon the sacred rights of individuals. The totalitarian state is in the ascendancy. Democracy is rapidly becoming a huge joke, personal liberty a relic.

What is our duty as Christians in this present evil world? If that question were to be answered in one word, I should choose the word witness. Just before His ascension our Lord said to His disciples: “But ye shall receive power when the Holy Spirit is come upon you; and ye shall be my witnesses both in Jerusalem, and in all Judea and Samaria, and unto the uttermost part of the earth.” That is a succinct statement of the Christian’s task in the world.

Christianity is not merely a theology; it is also a cosmology. Christianity tells man the truth, not only concerning God, but also about the universe. It is more than the true doctrine of salvation; it is also the one correct interpretation of life and the world. It is a comprehensive system of all revealed truth—not only the truth of God’s special revelation, the Bible, but of His general revelation in nature and history as well. And this system derives its unity from God, who is Himself the Truth as well as the Revealer of truth. Christianity is theism.

God has seen fit to reveal Himself to man in two books—the Bible, the book of special revelation, and nature and history, the book of general revelation. Now it is the duty of the organized Church to teach men the content of the former of these books, while it is the special task of the school to open the latter. To be sure, the two may not be separated. Truth can hardly be dealt with so mechanically. After all, truth is one because God is one. Truth is organic. And only he who has learned to understand the Bible can really know history and nature. Yet the distinction is a valid one. The Church can hardly be expected to teach the intricacies of mathematics, physics, astronomy, or the history of the Balkans. Nor does any one demand of the school that it preach the gospel. But Church and school together must declare the whole of God’s revealed truth.

All we can do is witness. While doing so, we hope and pray that our witness may find response in the modern world. But whether this will actually occur we cannot say. Nor are we responsible for results. Dean Inge once said: “The strength of Christianity is in transforming the lives of individuals—of a small minority, certainly, as Christ clearly predicted, but a large number in the aggregate. To rescue a little flock, here and there, from materialism, selfishness, and hatred, is the task of the Church of Christ in all ages alike, and there is no likelihood that it will ever be otherwise.” This is not a good statement of the task of the Christian Church. Reference to the preaching of the gospel of salvation in Jesus Christ is altogether too obscure. Nor is anything said about the Church’s being the salt of the earth. But who will deny that there is a great deal of sanity in the apparent pessimism of these words? Perhaps the witness of the Christian school too, like that of the Christian Church, is destined to fall in large part on deaf ears. But witness we must. And our witness should ever be clear and strong, and winsome withal.

And who will gainsay that the witness of the Christian school is precisely the witness which is needed by the modern world?
Modern man has forsaken God and His Word. He has turned antitheistic. He has cast overboard the absolute and put the relative in its place. For the objective he has substituted the subjective. In consequence he is hanging between heaven and earth. Nothing is certain save uncertainty. He asks questions innumerable but finds no answers. He is ever seeking but never finding. He hungers and has no food. He thirsts and finds no water. His soul is a great void. And the world is in turmoil. “Whirl is King.”

But the Christian school is characterized by theism, by recognition of God, by submission to the absolute and the objective. It not only asks questions but also solves the most fundamental problems of life. Accordingly it is marked by the calmness of certainty, the tranquillity of power, the serenity of the eternal.